skip to main | skip to sidebar

Insane in the Bane Brain. 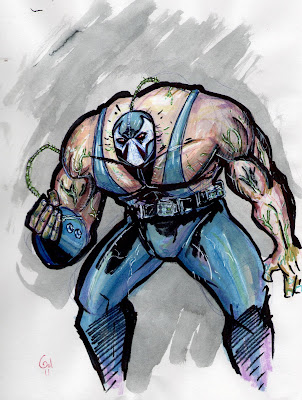 If you haven't heard yet, Bane is going to be played by Tom Hardy in the next Batman film along with Anne Hathaway as Catwoman. I was kind of shocked that out of all the great villains Batman has they went with Bane. Not really well known to non-comic fans. He seemed to be just another bad 90's marketing gimmick. I really hope Nolan plays up the criminal genius part and doesn't make him a hulking mindless brute like in Batman & Robin. This started as a doodle with a ball point pen. I was waiting for a friend to pick me up and I started playing with markers then colored pencils then paint an hour later I wound up with this. I don't think I've ever drawn him before. I like it. It kind of feels like I channeled my inner Simon Bisley.
Posted by Jim at 4:21 PM

Jim
I want to draw comics for a living.